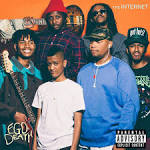 Day in Day Out

Rize of the Fenix

Rize of the Fenix [Deluxe Edition]

Asleep in the Bread Aisle [Clean]