The Times They Are a Changin'

If I Get Locked Up

G.O.A.T. Featuring James T. Smith: The Greatest of All Time

Do You Remember? [Stereo Mix] 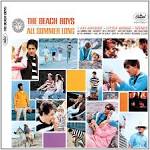 Nice It Up: The Best of Sugar Minott