Give Me Some Light

Then It Started Raining

The Country I Grew up On 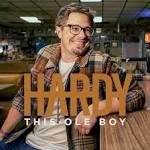 We Are the Ones (Reservoir Poetry)

Discuss these parked Lyrics with the community: