Tour of a Black Planet

It's Been a Long Time 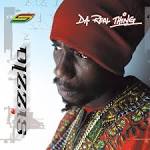 This Dick's for You

Till Death Do Us Part

Put Em in Their Place

Points on the Curve

Discuss these difficulties Lyrics with the community: