The Makings of Me

One of the Boys

One of the Boys

He's the One I'm Bringing Back 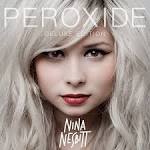 A Book of Human Language

Discuss these sideline Lyrics with the community: