The Pekes And The Pollicles

Puttin' On the Style

Putting on the Style

My Old Man's A Dustman

My Old Man's A Dustman

Hit Parade!: 54 Big Hits from the Best of the Hit Parade 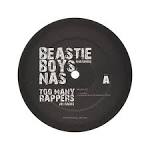 Too Many Rappers [featuring Nas]

The Warmth of Your Breath

The Element of Surprise

Every Soldier in the Hood

Discuss these police dog Lyrics with the community: