Skew It on the Bar-B 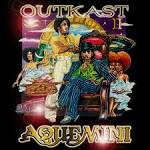 Skew It on the Bar-B

Too Much Pride [Bonus Track]

Crying for the River

Discuss these common axe Lyrics with the community:

Michael Jackson was known as the King of ...