There's Nothing Gayer Than Christmas

The Fire of Notre Dame

Aaron Smith and the Coal Biters 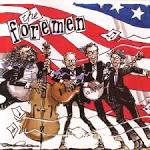 Discuss these catholicism Lyrics with the community: