A Better Place to Be

About A Better Place to Be

"A Better Place to Be" is a song by Harry Chapin from his 1972 album, Sniper and Other Love Songs. The song is about a midnight watchman confiding in a waitress, while drinking gin, about a woman that he met the night before and had a one-night stand . Released as a single, the song reached #118 on the Billboard Bubbling Under chart. A live version, from the 1976 album Greatest Stories Live, reached #86 on the Hot 100 chart. According to Chapin, it was his favorite song that he wrote.  more »

Harry Forster Chapin (December 7, 1942 – July 16, 1981) was an American singer-songwriter best known for his folk rock songs including "Taxi", "W*O*L*D", and the No. 1 hit "Cat's in the Cradle". Chapin was also a dedicated humanitarian who fought to end world hunger; he was a key player in the creation of the Presidential Commission on World Hunger in 1977. In 1987, Chapin was posthumously awarded the Congressional Gold Medal for his humanitarian work. more »

Discuss the A Better Place to Be Lyrics with the community:

Know any other songs by Harry Chapin? Don't keep it to yourself!

A Better Place to Be 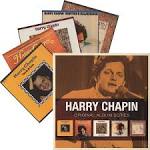