About Close To the Edge

"Close to the Edge" is a song by the English progressive rock band Yes, featured on their fifth studio album Close to the Edge (1972). The song is over 18 minutes in length and takes up the entire first side of the album. It consists of four movements.

Yes are an English rock band who achieved success with their progressive, art and symphonic style of music. They are distinguished by their use of mystical and cosmic lyrics, live stage sets and lengthy compositions, often with complex instrumental and vocal arrangements. Seventeen musicians have been a part of the band's line-up in its history, which has consisted of singer Jon Davison, guitarist Steve Howe, bass guitarist Chris Squire, keyboardist Geoff Downes, and drummer Alan White since February 2012. more »

Discuss the Close To the Edge Lyrics with the community:

Know any other songs by Yes? Don't keep it to yourself! 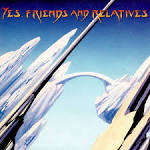 Will.i.am is best known for performing with which hip hop group?