The Friends of Mr. Cairo

Jon Anderson (born John Roy Anderson on 25 October 1944) is an English singer-songwriter and multi-instrumentalist musician best known as the former lead vocalist in the progressive rock band Yes. He is also an accomplished solo artist and has collaborated with artists such as the Greek musician Vangelis, among others. more »

Discuss the The Friends of Mr. Cairo Lyrics with the community:

Know any other songs by Jon Anderson? Don't keep it to yourself!

The Friends of Mr. Cairo 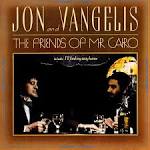 How many members are there in pop group Little Mix?