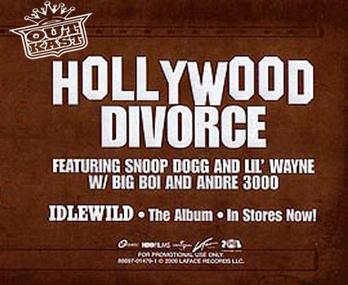 "Hollywood Divorce" is the fourth single to be released from OutKast's sixth studio album, Idlewild. The song features rappers Lil Wayne and Snoop Dogg on guest vocals. It is one of only three songs from the album that both members of OutKast appear on, the other two being "Mighty 'O'" and "PJ & Rooster". The single was released in November 2006, and peaked at number 20 on the US Billboard Bubbling Under R&B/Hip-Hop Singles chart.

Discuss the Hollywood Divorce Lyrics with the community:

Know any other songs by OutKast? Don't keep it to yourself!