O'Donel Levy (20 September 1945 – 14 March 2016) was a jazz and funk guitarist from Baltimore, Maryland. Levy studied at the Peabody Institute at Johns Hopkins University in Baltimore. He moved to New York City and toured with George Benson and Jimmy McGriff.He released his debut album, Black Velvet, in 1970 on Groove Merchant. This was followed by a live album recorded at the Cook County Jail in Chicago in 1972. Levy performed as a member of the Jimmy McGriff quintet.His album Breeding of Mind (Groove Merchant, 1974) crossed the genres of jazz, funk, and pop. He recorded it with Charles Covington, Chester Thompson, and Eric Ward, with arrangements by Manny Albam. Simba (1973) was arranged by Albam, produced by Sonny Lester, and recorded with Warren Bernhardt, Cecil Bridgewater, Eddie Daniels, Jon Faddis, Steve Gadd, Tony Levin, Lew Soloff, and Bill Watrous. Everything I Do Gonna Be Funky (1974) drew attention because of its risqué album cover.Levy's song "Bad, Bad Simba" from the 1973 album Simba was covered by Paprika Soul in 2001. Paprika Soul's version has been heard on The Weather Channel local forecasts in September 2001, again in October 2007 (to promote the album The Weather Channel Presents: The Best of Smooth Jazz, in which the song also appears in), and again since March 2016 as part of the return of their smooth jazz music. 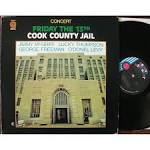 Share your thoughts on the O'Donel Levy Band with the community:

Know any other songs by O'Donel Levy? Don't keep it to yourself!