Derek Forbes (born 22 June 1956) is a Scottish bassist, vocalist, and sometime guitarist, best known for his work with the Scottish band Simple Minds, which he joined in 1978. He recorded with them from their early demos until shortly after their 1985 hit, "Don't You (Forget About Me)". He was dismissed from the band, apparently through petty jealousy—as told by Jim Kerr, who stated that it was a regrettable mistake—prior to the release of the global success of Once Upon a Time. Forbes has claimed that he wrote on 60% of the album, yet remained uncredited. Assuming he would quickly be asked to re-join the band, no legal action was taken.He reunited with the band for a three-year period from 1995 to 1998, before and during the recording of Néapolis. He and Mel Gaynor found out a few days before the Kosovo show at Glasgow's SECC, that they both weren't included; this was much to the confusion of the fans, as they had been told that both Forbes and Gaynor were not available to play, but were onstage directly before Simple Minds went on. Forbes has stated that he has never left the band, and also that he wasn't happy with the final mix of the album. Forbes and Gaynor appeared at the Scotland Rocks for Kosovo in 1999 performing Led Zeppelin's "Kashmir", whilst Simple Minds also appeared on the bill with Mark Kerr on drums and Eddie Duffy on bass. Forbes has sung with David Bowie, on the Iggy Pop album 'Soldier'. He played bass on the Kirsty MacColl hit 'A New England'. Forbes has performed onstage with Peter Gabriel After Simple Minds, Forbes went on to play in a number of other bands, including Propaganda (Germany) and Oblivion Dust (Japan), Spear of Destiny, 10:51 and the Alarm. He also played in Fourgoodmen, a Scottish supergroup, between 2005-2007 and formed XSM, who were originally to consist of Forbes, MacNeil and McGee from the original Simple Minds line up. XSM recorded an album's worth of tracks, but Mick MacNeil didn't want to play 'Live', so Forbes and McGee took the band out, along with 'one Hit Wonder' Owen Paul (McGee), sibling of Brian McGee. The guitar and keyboard player roles were twofold, with Steven Curley (version 1) on guitar, followed by Ant Seaman guitar (version 2) and Gary O'Hagan keyboards (version 1) and Andy Gall keyboards (version 2). Forbes was voted 'Best Bass Player in the World' in 1982, and 'Best International Bass Player' in a music poll in Australia, the same year. Forbes was also voted 'Best Bass Player in UK'. Forbes is highly respected by his peers and fellow musicians, including Adam Clayton, Peter Hook, Nicky Wire, Tony Butler, Pino Palladino, JJ Burnell, Bruce Foxton, John Giblin and Malcolm Foster.In 2009, Forbes was voted 'Scotland's Greatest Ever Bassist' by the readers of Dear Scotland, and his life and work is the subject of a biography in both print and film by writer/director Ethan Dettenmaier. Forbes had his own radio show on LA Talk Radio for two years, ‘May The Forbes Be With You.’ Production stopped after he joined Big Country. Forbes was a featured extra in the film 'This Is Not A Love Song'. Forbes was the bass player with Scottish band Big Country, replacing the longstanding Tony Butler who retired from the band, but left the band in 2015. Forbes has toured the East Coast of America for the last three years running (2015/16/17) with his all American band ('Derek Forbes band') members include John McNutt (ex Spear of Destiny), Danny Beisell (Fosterchild and American Vinyl), Tim McKinstrey (keys) and Marc Iezzi (drums). Forbes was awarded an Ivor Novello in 2016, for Outstanding Song Collection, for his song writing for Simple Minds, amongst others. Forbes is currently booking a Tour for his solo album 'Echoes'. He will be accompanied by two China Crisis members, Brian McNeill on keyboards, Siân Monaghan on drums and solo artist Natalie McCool on guitar 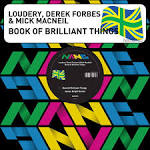 Share your thoughts on the Derek Forbes Band with the community:

Know any other songs by Derek Forbes? Don't keep it to yourself!

Devil Woman was a hit for Cliff Richard in what year?