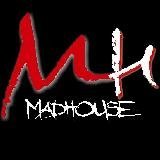 MadHouse is an Italian female-fronted rock band captained by the charismatic singer Federica Tringali. After several years of playing as a cover band, presenting to their audience some very personal hard rock versions of pop to rock hits such as Poker Face by Lady Gaga and others by Bon Jovi, U2 or Nirvana, the combo starts working on their own music in 2012. In the same year Federica decides to christen the band MadHouse, in order to highlight the existing parallelism between art and madness. Basing her lyrics on strong and direct life experiences, Federica writes numerous songs of great potential. Among these, 4 are chosen to be produced by one of the leading Italian producers: Marco Barusso (Lacuna Coil, Thirty Seconds to Mars, Coldplay). These four tracks get published in 2015 in 120 countries worldwide (under label ICM/Believe) with the EP "You Want More". MadHouse's first single and video "Empty Inside" is released in September 2015. In the video - directed by Disney Channel celebrity Jacopo Sarno - we see the band starred in a thrilling storyboard. The EP "You Want More" receives immediate recognition by critics and the single gets a considerable airplay from various FM and web radios in Italy, Germany, Spain and UK. In the fall of 2015 MadHouse put out the lyric video for "Skulls and Bones", the second single, and the video for "You Want More" third single and title track of the EP. MadHouse enter the studio to work on their first full-length this time under the artistic direction of DysFunction Productions (Fear Factory, Logan Mader, Dan Korneff, Alteria, Logical Terror, Klogr, Trick or Treat). "MadHouse Hotel", produced by dysFUNCTION Productions, is a concept album, composed by 10 tracks where every single one of those represents a hotel room, where every listener, once taken the key of it, chooses to stay in, in order to look for his own dimension. The artwork and the photography have been entrusted to the Italian artist Ugo Galassi, while the graphic has been realized by EdyArt. The album was released on March 29th, 2019. The band is currently engaged in promoting the album with a live tour that will also touch several European cities.

Lyrics for songs by MadHouse:

Share your thoughts on the MadHouse Band with the community:

Know any other songs by MadHouse? Don't keep it to yourself!