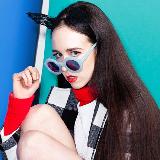 Alexandra Ashley Hughes, better known by her stage name Allie X (July 31, 1985-) is a Canadian singer-songwriter. The X in her stage name represents the variable in algebra with an unknown amount. Hughes began her career in the mid-2000s as an indie pop artist, performing as Allie Hughes. She recorded several self-released albums that never made their way onto store shelves. In 2013, Hughes moved from her home in Toronto to Los Angeles to pursue a full-time music career. She adopted the stage name Allie X, and began working with producers Cirkut and Billboard. In early 2014, Hughes released her first commercially-released single, "Catch." Upon its release, the single received generally positive reviews, even being praised by pop superstar Katy Perry, calling it her "spring jam." "Catch" charted on the Canadian Hot 100, peaking at #55. "Catch" went on to be re-released as an EP in late 2015, featuring 2 additional tracks, along with a remix by Kat Krazy. Shortly after the release of "Catch", Hughes released two more singles, "Prime", and "Bitch". They were released on March 18th, 2014 and April 6th, 2014 respectively. Hughes' debut extended play, CollXtion I, was released on April 7th, 2015 in Canada. It did not see a worldwide release until April 21st. She held a small North American tour to promote the EP in 2015. During 2014 and 2015, alongside her solo music career, Hughes contributed to Australian singer-songwriter Troye Sivan's album Blue Neighbourhood, co-writing seven tracks. These tracks included "Youth" and "Talk Me Down", which were both singles on the album. In early 2016, Hughes released a free-to-download song, titled "Old Habits Die Hard", which was meant to be a non-album single. In May 2016, Hughes released another single titled "Too Much To Dream", and announced a project called CollXtion II: Unsolved. This project saw her release a collection of demos and songs through Spotify to allow her fans to choose some of the songs that would appear on CollXtion II. On April 28, 2017, Hughes released her first single from CollXtion II, "Paper Love." About a month later, on May 26, 2017, Hughes released "Need You." CollXtion II was then released on June 9th, 2017.

Lyrics for songs by Allie X:

Share your thoughts on the Allie X Band with the community:

Know any other songs by Allie X? Don't keep it to yourself!