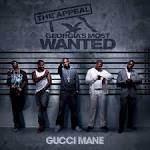 The Appeal: Georgia's Most Wanted