The Invasion of the Flat Booty Bitches

She's in Love With the Boy

Guess Who I Saw Today [Live]

This Time The Dream's On Me

Why Aren't You Dead?

I Won't Come in While He Is There

This Is for the Lover in You

This Is for the Lover in You [Honey Lookin' Laced Extended Remix; Bonus Track]

No Particular Place to Go

The Biggest Ball of Twine in Minnesota

I Thought About You

You Came a Long Way from St. Louis 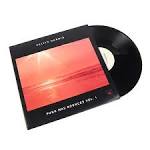 Discuss these parked Lyrics with the community: