You Got Me Running

Where We Come From 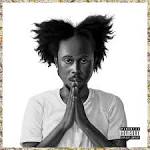 Where We Come From [Deluxe Gatefold Edition]

Trouble Where You Seek It

You Can See Everything

Discuss these grizzle Lyrics with the community: