Let It All Hang Out

Playing With Their Hearts

The World Turns Round

When I Write the Book 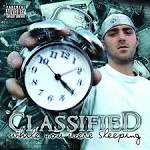 While You Were Sleeping

Where My Love At?

Classics the Collection of Phat Tracks