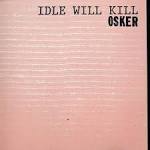 The Sounds of Change

Keep Your Hands out My Pocket

Theatre of the Macabre

Let It All Hang Out