Rocks in the Head

As I Lay Dying 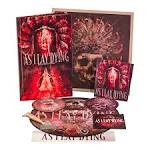 Fields of Fire: The Ultimate Collection

Without The Aid Of A Safety Net (EMI)

In a Big City

Discuss these consumption Lyrics with the community: