To Gates of Blasphemous Fire

The Whispered Lies of Angels 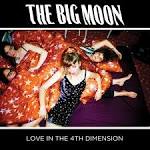 Love in the 4th Dimension

So Let There Be Light

Discuss these civilizations Lyrics with the community: