Waiting for the Next Explosion

Beach House on the Moon 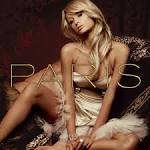 Why Must the Show Go On?

Discuss these announce Lyrics with the community: