Only the Rugged Survive

Cradle to the Grave

Can I Live Freestyle

The Birth of a Prince 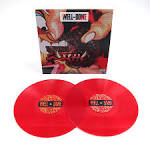 You Don't Even Know

Discuss these vicks Lyrics with the community: