Search results for 'swap in'

Caught in a Deep Thought

Turn Down for What

Two Sides to Every Woman 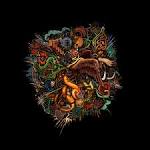 Draped Up and Chipped Out, Vol. 3

Discuss these swap in Lyrics with the community: