Nobody Wins a War

Bowie at the Beeb: The Best of the BBC Radio Sessions 68-72

Letter To The Editor 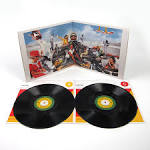 I Am the Thorn

Bad Nite at the Mustache

The Day I Died

Where Angels Fear to Tread

I Told You So

Discuss these stench bomb Lyrics with the community: