Runnin' Off at Da Mouth

A Penny for My Thoughts

Can I Borrow a Dollar? 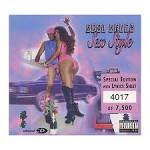 Discuss these stage crew Lyrics with the community: