The Sisterhood of the Traveling Pants [Original Soundtrack] 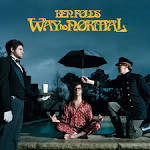 Mama Said Knock You Out

Discuss these rhyming dictionary Lyrics with the community: