The Hell of Verdun

Back to How It Was 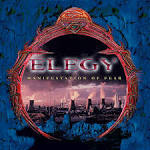 Straight on Till Morning

Discuss these resulting Lyrics with the community: