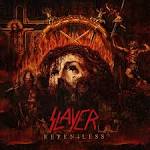 Welcome to the Internet

Can't Go Back (To MOD Pizza)

Too Low to Fall

The Power of the Misguided

Discuss these racial slur Lyrics with the community: