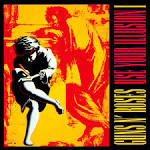 Use Your Illusion I

Land of the Free

Should I Call You Jesus?

Speak of The Devil

Waiting For The Millennium

Discuss these organized religion Lyrics with the community: