Man of the Hour

All I Can be 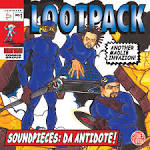 RZA as Bobby Digital in Stereo

Discuss these nuclear transfer techniques Lyrics with the community:

"And let me feel it isn't real that I've been losing you."