The Sun and the Drunks 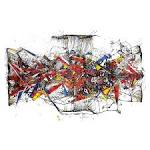 Far from the Madding Crowd

Rest in Your Arms

Me and the Raven

Discuss these narrow boat Lyrics with the community:

In Dolly Parton‘s hit song — who was the real Jolene?