The One With My Friends

Get up Everybody (Get Up) 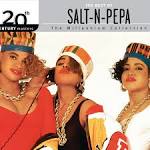 20th Century Masters - The Millennium Collection: The Best of Salt-N-Pepa

Discuss these lyrics/best days of your life lyrics taylor swift Lyrics with the community: