The Devil Made Me Do It

Me Against the World

Destruction of a Guard 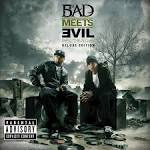 Not a Chance (feat. Kelvin Saints)

Mourning in America and Dreaming in Color

Discuss these hostile witness Lyrics with the community:

From which Muse song are the lyrics: "Far away. This ship is taking me far away"?