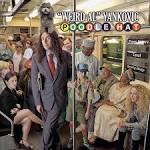 The Silver Cord Is Severed [2 CD]

The Dirty Story: The Best of Ol' Dirty Bastard

Our Love to Admire

Our Love to Admire

To Catch a Mouse

Discuss these hardware Lyrics with the community: