Money By Any Means 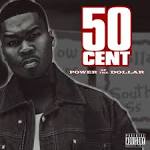 Power of the Dollar [Unreleased]

A Picture of the Eighth Wonder

Discuss these focuses Lyrics with the community: