Made Me A Dogg

Cute Is What We Aim For

Those That's Bout It

War to End All Wars 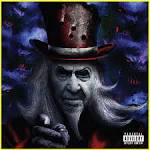 Discuss these facade Lyrics with the community:

Which girl group had hits including Pure Shores and Never Ever?