I Wonder What Happened to Him?

Rip Your Heart Out 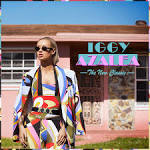 Rip Your Heart Out

A Change of Pace

An Offer You Can't Refuse

Discuss these excessively Lyrics with the community: