Say It to My Face

Say It to My Face

Asking Bodie For A Package LYRICS

Get What You Deserve

Asking Bodie for a Package 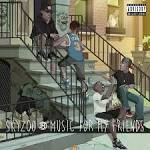 Discuss these deterrence Lyrics with the community: