You Set the Scene [Alternate Mix]

You Set the Scene

A Wave for the Expendable

All That I Got Is You

All That I Got Is You

No Shorts, No Losses

I Be Puttin' On 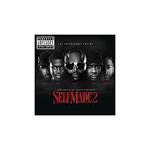 Maybach Music Group Presents Self Made, Vol. 2: The Untouchable Empire

I Want It All

I Know What I Want for Christmas

Merry Christmas Wherever You Are

Discuss these consists Lyrics with the community: