As Kind as You Can

You Asked For This 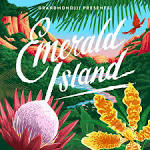 Put Him in the Hall of Fame

Discuss these commissioners Lyrics with the community:

The real name of Bruno Mars is?