The Boy from Oz [A Decca Broadway Original Cast Musical]

It Ended on an Oily Stage 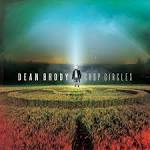 Discuss these coastal Lyrics with the community: