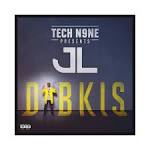 Voyage of the Acolyte

We're Gonna Have Us a Champagne Jam

Retribution of Our Lord

Discuss these banishment Lyrics with the community: