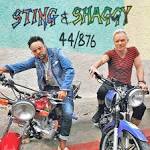 Turn Me On Dead Man

The Ballad of Doris Delores

Discuss these bandmate Lyrics with the community:

Which Giant member sings songs from their 1989 debut studio album: Last of the Runaways?