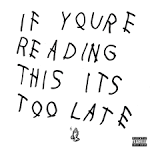 If You're Reading This It's Too Late

Riley From The Boondocks

Just Cause Y'all Waited

Discuss these Vlive Lyrics with the community: