Up Here in the North of England

If You Want to Defeat Your Enemy Sing His Song 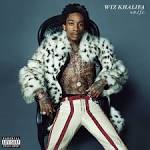 Sons of the P

Let's Get It On

When the Sun Comes Up

Don't Be a Sucker

Discuss these Townsend Lyrics with the community: