I Love My Friends

The Redemption Is Over

Year of the Gentleman

Wading Through a Ventilator [Live] 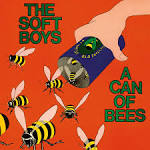 A Can of Bees

Welcome To the People I Used to Know

Discuss these Kimberly Lyrics with the community: