Obie Trice III (born November 14, 1977) is an American rapper and songwriter. He began rapping at the age of 11, and is most known for his time spent signed to Shady Records. Obie Trice has formed his own record label, Black Market Entertainment. more »

Discuss the Obie Story Lyrics with the community:

Know any other songs by Obie Trice? Don't keep it to yourself!

Second Round's on Me [Clean] 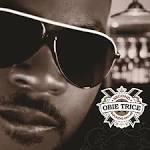